It was a calm summer day in the small northern Michigan town of Charlevoix, Mich. The smell of diesel fumes from idling engines floated in the air as Meg and I were waiting aboard the 1962-built, 95-foot-long Beaver Islander ferry, prior to heading for the small but mighty Beaver Island Music Festival, where the talent is extraordinary, on Beaver Island. It’s two hours from Charlevoix to Beaver Island and we were fortunate to have a waveless—by Lake Michigan standards—travel day.

First, some history and facts of fun: Beaver Island, at 13 miles long and 6 miles wide, has been known of, traveled upon and established from the 17th century up until the 19th century (and beyond…of course), when notably, a one unabashed, and converted to Latter Day Saints, James Strang took it upon himself to declare his title as king and settle his “kingdom” upon the island. This didn’t sit well with the many Irish immigrants who settled on the island beginning in the mid-19th century and “king” Strang was overthrown. There’s a placard along the Saint James Harbor that says as much.

Now for the fun fact: There’s an activity on Beaver Island called ‘boodling’. It involves drinking a bear on a picnic table…in the back of a pickup truck traveling 25 miles per hour or slower. I wish I had a photograph of this…and I very much wish we’d been able to do this. Another time, for sure.

Once one disembarks a ferry at the docks, the feel of island life is palpable. There’s a sense of community but there’s also a sense of history; events have happened here. It’s a microcosm of tourism, work and life.

Our lodging was the Harbor View Motel which overlooks Saint James Harbor. It was a calm place to stay and its view of the bay was perfect and picturesque. We were able to see the docks when a ferry would arrive and depart. Ferry arrivals struck me as each one involved mini stories of celebration and welcoming as well as simplicity and appreciation from people in all walks of life. It reminded me of old black and white photos you’d see of large passenger boats pulling into docks waving to shore as people on shore waved back—except this was live and in color.

Often, I’d find myself exploring around the small town and taking in the pace of life. To live on Beaver Island year round would be tough, no doubt. Our time on the island was an extended weekend in the summer so it didn’t paint a full picture of what takes place but it was an enchanting place to spend time nonetheless. I’d absolutely love to document the people and happenings on the island for one year.

Feodar Protar was a healer and scholar—basically, a man who did it all—who lived on the island from 1893 until his death in 1925. While we were there, his house was open for tours and an island resident, Dale, was sitting on the front porch “playing” the part of Protar. Dale was easy going and fantastic to talk with. I politely asked if I could make a portrait of him and he obliged, not adjusting or changing his posture or facial muscles in the slightest.

Beaver Island is a place where truly the journey to get there is part of the experience and not to be missed. I think I photographed more on the ferry and around the ferry than the actual island. There’s a romanticism about traveling on the water to reach, or depart from, an island. It’s a simple mode of transportation and a method that’s time tested and used.

Aside from some bits of sun, the weather was mostly rainy so there wasn’t a lot of time spent at the music festival but that was ok. Rain seemed appropriate for an island with Irish roots; plus, the breaks in rain allowed us to get on our feet or our bikes and learn about what the incredible island has to offer. If you go, slow your pace and enjoy the people, the quiet and the details that abound. The island has many stories if you wait, watch and listen. 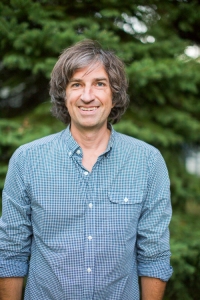