Downtown and Back with the Trek 800

They say trends of all kinds are cyclical in nature and I’d like to think this is the case with my white Trek 800 mountain bike adorned with factory applied black splatter paint. It was my first mountain bike, purchased when I was in the eighth grade, and it continues to work wonderfully. When possible, it’s my favored mode of commuting into town or wherever else my too-long-for-the-bike legs care to take me. Such was the scenario last Friday when the weather was calm, the midday sun was high, the day nearly cloudless and my creativity was needing an outlet.

After a half hour, my bike was parked and I was on foot, camera slung over shoulder. With coronavirus doing its thing, the streets were sparsely populated. My focus on the trip was to photograph for the sake of photographing, but I also wanted to incorporate elements that make the photos say ‘coronavirus’. Behind one of the buildings, someone has displayed sheets of high visibility-green with letters written on each one so that it spells P-R-A-Y in the window. Many photographers, myself included, have taken more than a fair share of empty-street photos but I try to incorporate some people. Since, there are indeed people outside, the documentary photographer side of me wants to accurately portray that fact. After looking for a place to make the photo, I found a spot across the river from the building and waited for an individual to pass the building. Earlier in the week I made an effort for this same photo but alas, not a soul passed by. This happens but this is why a photographer wanting a specific image needs patience. On this day I was successful, and quickly too. A many walked from right to left and I was happy with it.

While walking away, an orange bag containing the local newspaper was not only at my feet, but there was a visible headline including the words ‘COVID’. I couldn’t believe it! As I’m making these images, I’m trying to capture subject matter that will be interesting now and many years later. The appeal for me here is that the paper is unopened which lends a sense that the paper is indeed ‘of the period’ of the pandemic.

Once I crossed the river, a boy was riding his bike through town and I photographed him. The sight of the boy riding the bike on a sidewalk and the backdrop being an old, downtown building was something I photographed because it’s a clean image and it’s of something going on downtown.

The city of Traverse City was founded by a lumber baron named Perry Hannah. There’s a metal statue of him standing on the corner of Sixth Street and Union Street near the Boardman River. When the pandemic news was new and freshly inescapable, someone placed a face mask on him. When I went to photograph it the next day though, it was gone. Fast forward to last Friday when the mask was back. Good fortune in proverbial hand, I walked toward the statue and photographed Hannah with the mask.

While returning back toward downtown, some people had stopped on top of one of the bridges on Union Street to watch people fishing during the annual spring salmon run. One man was looking out while the dog he was walking was staring at me. The scene seemed like a good one to photograph so I did, then continued walking toward town until I reached the beautiful, circa mid-1990s Trek 800 and pedaled home. One day I’ll show you a photograph of the Trek 800. One day.

There is one thing the photograph must contain, the humanity of the moment. 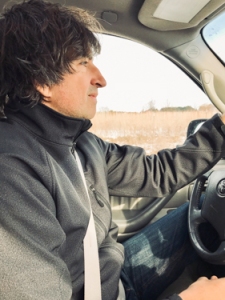 My name is Keith and I have a deep appreciation for using photography to tell stories as well as to capture everyday vignettes and details. Hopefully you’ll find some helpful tips and that you’ll be inspired along the way. Thanks for making time for Village Voyager.